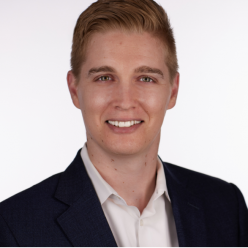 Robert “Robby” McDonald, a Tampa Bay native, joined Hunter Business Law as an Associate Attorney in 2021. Robby is developing his practice at Hunter Business Law in the areas of general corporate law, business development, and mergers and acquisitions. He is further focused on where these areas intersect with his interests in emerging technology, such as blockchain and cryptocurrency, and arts and entertainment. Robby uses his experience and interest in these domains to assist businesses in navigating the legal implications of emerging trends and technologies that are shaping the future.

Robby developed his business acumen in the Tampa Bay music scene, where he managed a thriving independent music establishment and worked within a network of artists, journalists, record labels, retailers, and show promoters for nearly a decade. During law school, Robby clerked for the general counsel of Raymond James Trust, as well as the Honorable Ronald Ficarrotta, Chief Judge of the Thirteenth Judicial Circuit Court of Florida. He also clerked in a private practice setting, where he emersed himself in the fields of business transactions and estates. Robby began his career in civil litigation which has allowed him to better identify potential legal issues facing our clients. His prior experience and curiosity of new frontiers provides our clients a unique perspective for leading their industries.

Daring ideas are like chessmen moved forward—they may be beaten, but they may start a winning game.
– Johann Wolfgang von Goethe

Get in touch with our team